Bayonetta 2 is an action-packed hack and slash game developed by PlatinumGames. While there are different skill levels you can play Bayonetta with, this Bayonetta 2 guide will help you get started with this game. With this Bayonetta 2 guide, you can get an understanding of how to play even the most difficult situations in the game with great confidence.

Bayonetta 2 is similar to its predecessor. The players control the character of Bayonetta as she fights many demons and angels using various combinations of melee and firearm attacks. Dodging attacks at the last minute will activate ‘Witch Time’. Witch Time slows down enemies attacking Bayonetta. You can use this to quickly eliminate your enemies and to get out of tricky situations. This can also be useful in solving certain environmental puzzles.

There are many other special moves that a player can use in Bayonetta 2. Special moves, known as Torture Attacks will trap opponents in infernal devices. This earns you extra points. You can equip Bayonetta with many different weapons.

Bayonetta 2 adds over its predecessor by adding a new gameplay element known as Umbran Climax. When your character has a full magic gauge, you can activate Umbran Climax. This new feature strengthens the attacks of Bayonetta.

In the hack and slash genre, most games have fight combos. Bayonetta 2 is no exception to this rule as it offers many combos to slice, dice and bludgeon your enemies to death.

Similar to Bayonetta, you can practice these combos during the loading screens. It is crucial that you use this time to find out the combo that you are most comfortable with.

Many newbies simply bash the buttons and hope it works. However, you will enjoy the game more if you are in control of the combos. Planning an attack and executing it to perfection gives us more satisfaction than simply attacking without a plan.

We found most success when we tested a few combos and settled on 2 that suited us best. These combos dealt great damage on the enemy and also helped keep a distance between enemies and us.

Bayonetta 2 Guide: Why Dodging is Crucial

In many hack and slash games, you can simply go through the game with constant attacks. Anyone who comes in your way dies before coming even close to you. If you have the same plan for Bayonetta 2, the game will kick your ass.

Defense is just as important a part of Bayonetta 2 as the attack. In fact, Bayonetta 2 incentivizes defense. As discussed previously, the game slows down time (Witch time) if you are able to dodge an attack at the last moment without getting hit.

This momentary break from the chaos of the game will help you deal significant damage to enemies around you without much risk.

In order to maximize Witch time, note the attack patterns. Watch out for signs of an attack. Your enemy will wind up before an attack or pull back an arm or leg before trying to punch or kick you. To add to this, there are also sound effects and visual indicators that provide you enough warning of an imminent attack.

Bayonetta’s Magic gauge is one of the most helpful tools in your arsenal. By defeating consecutive enemies and by triggering Witch time, you can fill this Magic Gauge. After you have filled the Magic Gauge to the required extent, you will get the option of starting Umbran Climax or a Torture Attack.

As previously stated, Umbran Climax will give Bayonetta really powerful demon attacks for a limited period of time. Torture Attacks allow Bayonetta to deal really large damage to any single enemy. In order to succeed in this game, you need to use these two attacks as much as possible.

During gameplay, as you progress, you will unlock many different weapons which you can then purchase from the Gates of Hell. A unique part of this game is that you can attach weapons not only to Bayonetta’s hands but also to her feet.

The various weapons are designed differently. While some of these weapons are swift and deadly at short range, others have been optimized for long distance hits which do lesser damage to the enemy.

The Alruna, for example, has good reach and hits many enemies at once while the Takemikazuchi deals large damage but takes time to swing.

Experiment with these different weapons and find out the ones that suit your strengths and weaknesses. This is especially useful in later missions as you will need to maximize your attack strength while dodging attacks.

Here are a few weapon combinations that we liked:

Techniques can be purchased from the Gates of hell. These are special moves that give you an edge over your enemies and help you quickly go through the game. There are many different techniques you can choose from and hence, it is difficult to decide which one you should go for in the beginning.

Hence, we have given details of a few of these techniques which we found to be the most useful. 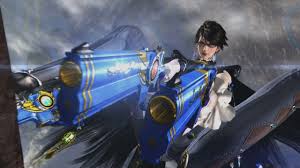 You can carry two accessories with you during the game as Bayonetta has 2 slots in her inventory for accessories. These can be purchased from Gates of Hell. These accessories are designed to help you when you are struggling. While many intermediate to advanced players won’t need these accessories, it may be crucial for beginners. Although these are costly, these can be extremely useful to you.

In each level of the game, you will find many different enemies to battle with. Based on your performance in each battle, you will get rewarded with certain medals.

At the end of each stage, the game tallies your overall score and gives you a medal according to your performance. It is therefore important for you to locate each of these battles and earn the best possible score in each of these. The idea is to get the best medals, the Platinum or Pure Platinum medals.

Remember that getting these medals are not easy and that you will need lots of practice and may need to play every stage many times to get the best score.

Here are a few tips that will help you maximize your score on each level:

There are many collectibles hidden all over the game. Even if you are not actively looking out for them, you have a good chance of coming across at least 2-3 Umbran crows during the game. Try to gather as many of them as you can. Here’s how to do so:

You will also find Angelic hymns in the game. These are sometimes out in the open and can sometimes be a reward for winning battles off the course. Grab angelic hymns to unlock purchase of some weapons from the Gates of Hell.

Similar to our guide on getting medals, you must stray off the path to get more angelic hymns.

With this, we end our Bayonetta 2 guide for beginners. Was this guide useful? Did you find what you were looking for? Did we miss something? Tell us in the comments section below.